Just a quick note for any prospective clients out there that I am writing web content again. Still depressed, but writing again.

Posted by RenaSherwood at 7:24 PM No comments:

My 15th Anniversary of Returning to America

15 years ago today, my 13 month old dog Pony and I made two long train trips, a taxi ride and a trans-Atlantic flight from the UK to the country of my birth, USA. My Mom and Dad, divorced but together that day, picked us up. Pony and I had been homeless together and Mom consented to take us in after someone burned our bender down. A bender is a makeshift living space made from bending young tree trunks to make a frame where you can toss blankets and tarps over. We had been living in a two-person tent for over a month.

15 years later and there's only Mom and me left. I also have a one-year old goldfish and one other dog, Hugo (now 10) and that's it. I've lost my job, my Mom lost her ability to walk and I've lost any reason to write anymore. This photo was from around 15 years ago, clipped from The Bath Chronicle, which is why it's a bit wrinkly. 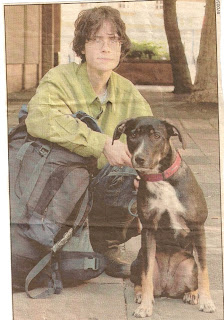 Posted by RenaSherwood at 11:47 AM No comments:

Pony was the dog of a lifetime. When she died I cried out, "How will I live the rest of my life without her?" After all we'd been through for 15 years -- being beat up by the same guy, fire, flood, homelessness, international travel -- and even though I have my 10 year old dog Hugo, I am alone. This photo was taken when Pony was young and healthy. 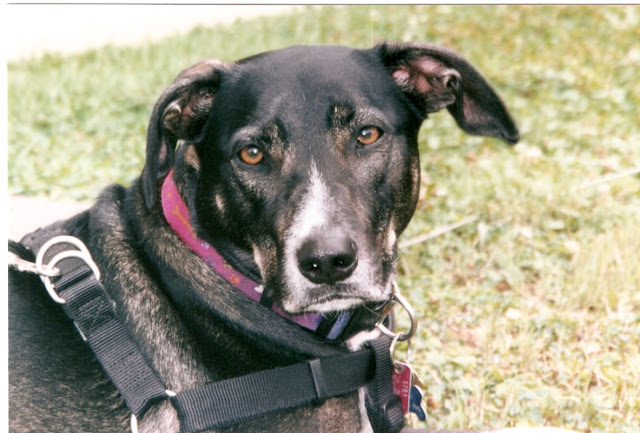 My Dad Died and I Don't Know What to Do

Things have never been so bad with me. I stopped writing because I am so overwhelmed by panic and sorrow. As the title suggests, my Dad died of a suspected heart attack on March 30. He was found by a concerned neighbor. He lived alone in the Poconos. I tried calling him that Sunday (I usually call him on Sundays) and he didn't pick up. No big deal. He's done that before. I called back on Monday the 30th at 7:30 pm and still he didn't pick up. At 8:30 I got a call back -- from the county coroner.

And it's been all downhill ever since. I live 150 miles from his place. He had about 12 cats. two friends from him from church are taking care of the cats but they will not move them out of the trailer. I have no idea what's going to happen to the cats and I am so far away I cannot do anything about it.

My only sibling, my brother Matt, lives in Canada. He wants the trailer, Dad's life insurance, the SUV and the bank account. We've already paid a month's sewage bill on the place, where nobdy lives but the cats and two helpers who check in on them daily. I have no idea what will happen if the electricity bills aren't paid. I'm told the pipes in the mobile home will explode for some reason.

According to relatives, Dad did not leave a will. Which means everything has to go through probate, which means someone has to go to the courthouse in the county where Dad died.

Why can't I do it? First off, I'm not a good driver. Putting me behind the wheel of my SUV on the highways and traveling lost in the Poconos is not in the public's best interest.

But mainly I can't do anything because of my Mom. She's severely crippled, canot walk (cannot even lurch into a wheelchair) and going downhill. She doesn;t have the coronavirus, but does have many health problems like Diabetes Type II and spinal stenosis. I just lost my Dad (and seven months ago, my beloved dog Pony) and now I'm worried I'm going to lose my Mom.

So there's Dad's things and family obligation to do soething about them on one hand and on the other hand I have to take care of Mom. Taking care of Mom is my priority. I have to let all that stuff go (even the photos, even Dad's handicrafts, even a painting by my Uncle Jack) and stick to taking care of Mom in this time of CORVID-19.

Life has suddenly become a very fragile and terrifying thing.

How I Got Back to Writing Again

It's Thanksgiving here and I finally have the time and (more importantly) the energy to post on this sadly neglected blog. As the title suggests, I've been writing again here and there as my time, my health and my Mom's lack of health permit.

So, how did I manage it? Simple. I spent all my money. I drained my bank account and had some fun doing it, too. I spent most of it on books and Breyer model horses. I used to be a major collector of model horses when I was a kid (and I was a kid until I was 30.) I know Breyers are the gateway drug to hard drug equivelent of model horses like Peter Stones, resins and (gasp) porcelains, but I have been able to keep it at just Breyers.

I had hoped to add a photo of my collection but I cannot get the damn digital camera or the smartphone with the camera to work. I know there is a camera on this laptop but i cannot get a decent picture with it.

I did, however, manage a photo of me with Hugo, my sole remaining dog. 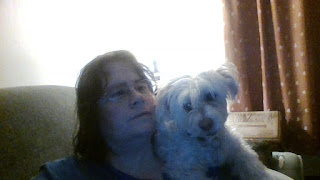 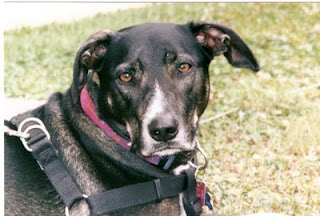 Pony went downhill suddenly and died quietly at home in the living room surrounded by her human family and my other (now only) dog Hugo.

Pony was born on 13 August 2004 in a council flat in Trowbridge, England. I was given her when she was 7 weeks old. We were both beat up by the same guy. He burned my home down just before Pony's first birthday. We fled together for my Mom's home in Clifton Heights, PA, where she spent the rest of her life. She was 15.

I know I'm supposed to write a proper eulogy but I can't. I have no idea how I'm going to face the rest of my life without her.
Posted by RenaSherwood at 8:11 PM 6 comments: 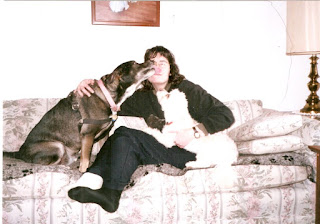 Amazingly, Pony has made it to her 15th birthday. I say amazingly because one week after her 14th birthday, she began having seizures. Now she's on medication and the seizures seem to be under control for now. Pony has sure slowed down since her puppyhood (it's really weird not to have her pulling while walking anymore) but so have I.

Unfortunately, I don't have a recent photo of her to post here since I still haven't been able to figure out the damn digital camera I bought Mom about 11 years ago. I tried to give the camera away but Mom won't let me. That's my excuse, anyway. This photo was taken about 2010 or 2011 when Pony could still jump up on the couch and Hugo was young.

Since things have been very bad here, especially with my Mom's health, I probably will not be updating this blog more than once a year any more.
Posted by RenaSherwood at 1:07 PM No comments:

RenaSherwood
Rena Sherwood is a fan of Peter Gabriel Jeremy Brett's Sherlock Holmes: a lucid dreamer; a horseless horse lover; and a freelance writer who has lived in the UK and the US. She holds an Associate's in Liberal Arts and a Bachelor's in English. She's been writing web content since 2006. Her first eBook, Not the New Adventures of Sherlock Holmes, came out in 2014. She is currently writing a science fiction book on horse racing. Please do not use any blogs in the place of a medical professional's diagnosis. If you want Rena to write for your blog or site, contact her at JPWS61@aol.com